In communities from East Lansing to East Africa, MSU pushes the boundaries of discovery and forges enduring partnerships to solve the world’s most pressing problems—from ensuring safe food and water supplies and developing lifesaving vaccines to exploring alternative energy and preparing a new generation of urban educators. 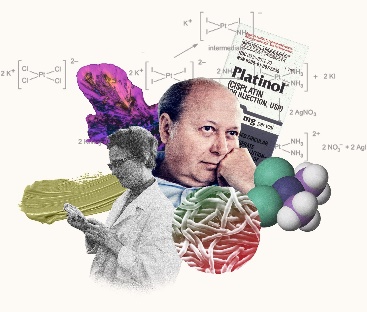 Michigan State University’s achievements are as diverse as they are consequential: the university developed hybrid corn, the process for the homogenization of milk, and a cancer-fighting drug that has saved millions of lives. This cancer-fighting drug, cisplatin, has been called “the penicillin of cancer drugs” and the “gold standard” to which researchers compare new cancer therapies.

Cisplatin was created by an Italian chemist, Michele Peyrone in 1844. Over 100 years later, MSU researchers made the ground-breaking discoveries leading to cisplatin as a cancer therapy. Barnett Rosenberg, a biophysical chemist at MSU, observed that the platinum electrodes he used to generate electric fields were corroding in the test solution. This platinum mixture (cisplatin) prevented Dr. Rosenberg’s bacteria from dividing, and he later published findings that cisplatin could cure tumors in mouse models.

Dr. Nikolay Dimitrov, a physician-researcher at MSU, conducted the first clinical trial with the drug, and in 1978 cisplatin was approved by the U.S. FDA for the treatment of advanced testicular and ovarian cancer. In 1979, cisplatin was approved in European countries. The use of cisplatin, when combined with early detection, has resulted in a cure rate of over 90% for testicular cancer patients. Cisplatin has been used to treat many other cancers, including lung cancer, bladder cancer, and cervical cancer.

MSU researchers have also made significant contributions to the treatment of advanced cancer using neutron beams and proton therapy. In the early 1980s, Henry Blosser, the founding director of the MSU National Superconducting Cyclotron Laboratory, was creating a third-generation cyclotron (the K1200) while simultaneously working on an innovative medical project with collaborators. The collaborative research used a neutron beam produced by a cyclotron to kill cancer cells, which became an exceptionally effective cure for localized, advanced prostate cancer. This work brought new hope and a new therapeutic option to cancer patients with treatment-resistant tumors. Blosser authored papers on various topics in nuclear and accelerator physics, and the success of isotope research at MSU has led to the establishment of the Facility for Rare Isotope Beams (FRIB). FRIB is a new cutting-edge national user facility for nuclear science, providing intense beams of rare isotopes to enable scientists to make discoveries.

The "Accidental" Cure—Platinum-based Treatment for Cancer: The Discovery of Cisplatin